A (former) colleague needed to transfer an Oracle Data Pump file to Amazon S3 (in order to allow Amazon RDS Oracle to import said Data Pump file), but the origination server was running Oracle Solaris and the customer needed the AWS CLI on that server. AWS documentation has no steps for installation of the AWS CLI on Solaris, so I decided to write up this short note.

The test system I used for validation was a SunFire V100 (a circa-2003 Sun SPARC machine with a single-core, single-socket UltraSPARC IIi clocked at 650MHz, and probably slower than a Raspberry Pi). This test system was running Oracle Solaris 10 update 11 (from here) with the CPU OS Patchset 2018/01 Solaris 10 SPARC.

Output of uname -a is

The first required step is to install a later version of Python (even with the 2018/01 patchset, Solaris 10 comes with Python 2.6.4 which is far too old). Note that this Python package is from OpenCSW Solaris Packages, which is a third party. Enterprise customers would need to have their security teams validate whether OpenCSW is a permissible source of packages.

Once Python 2.7 is installed, you can then download the AWS CLI, version 1 (note that support even for Python 2.7 in the AWS CLI is ending very soon, mid-2021 at the time of this writing, so a specific AWS CLI version that does support Python 2.7 must be used). Note that we have to use a particular switch with wget because the version of wget that comes with Solaris 10 is very old and does not recognize the SSL certificate from Amazon S3.

We can then install the AWS CLI, but we need to make sure the right version of Python is used, i.e. it must be ahead of the system Python in the path.

After the installer completes, the AWS CLI is successfully installed, and you can configure credentials as appropriate.

Here I am attempting to measure some degree of whole-system performance by using ffmpeg to transcode Big Buck Bunny. This is a CPU-bound (more correctly, FPU-bound) benchmark with some memory and I/O load due to the very large size of the movie. I've used a statically-linked binary that is not particularly optimized for particular processor features or GPU's (ffmpeg can greatly speed up transcoding on Nvidia GPU's).

Here are the necessary steps to replicate my results (these are for Linux; on MacOS, I used the ffmpeg distribution from brew but the steps are otherwise identical):

Note that we are limiting the number of threads that FFMPEG can use to 2, which allows it to only use 2 cores. On a 4-core (or more..) machine, the encoding results are much better, but since many of my data points are from 2-core machines, we have to limit the number of threads to 2 in order to have an apples-to-apples comparison.

Note that on a 2-core hyper-threaded system, "in theory" 4 threads is ideal; however, hyper-threading is really only relevant for I/O-bound workloads, and since FFMPEG is CPU-bound, a thread limit of 2 is more appropriate.

If we consider the SAPS results for the previous-generation AWS C3 instance family:
The C3 result is about 6% lower than the c4.8xlarge on a per-core basis. If we recall the naive Big Buck Bunny transcoding benchmark, the C4 is about 12% faster than C3. Thus it appears that SAPS is not purely a CPU benchmark (as it should be) but is strongly CPU-dominated (at least half of the SAPS is directly attributable to CPU performance).

Naively concluding, there appears to be (on average) around 10% performance improvement across Intel CPU generations (across tick and tock). This means CPU performance doubles in 6.9 years (87 months - a far cry from Moore's Law which optimistically predicted 18 months
at October 25, 2019 No comments:

This is the time-honoured Linux kernel benchmark.

In order to prepare a stock Amazon Linux 2 installation to compile the kernel, the following packages need to be installed:

This was on Amazon Linux 2, with a 40GB GP2 EBS block storage volume.

Update 13-Dec-2018. The new Z1D instance is supposed to be significantly faster than M5/C5/R5 due to sustained 4 GHz Turbo Boost on all cores.

sys 5m2.343s
also 23% faster. So it looks like for general purpose workloads (that are probably I/O bound) the Z1D only provides a 20% performance uplift.

Getting Oracle Linux on Amazon EC2

As per Oracle's instructions - https://linux.oracle.com/switch/centos/ adding the GPG key is no longer needed, the bad news is - the procedure documented by Oracle throws a "Broken pipe" error, and the OS left in an unusable state (all Yum configuration disappears): 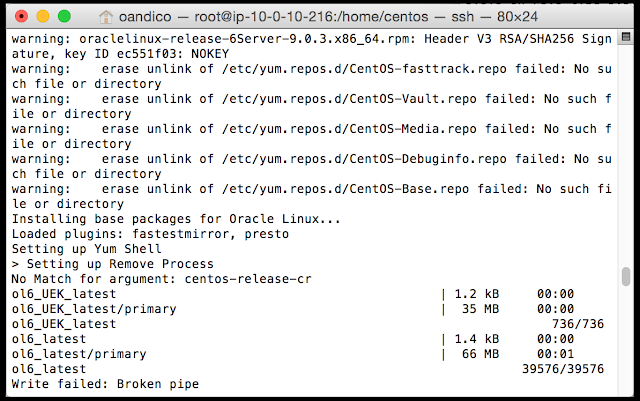 How to fix (basically just nohup the script).

Start with the CentOS 6 (x86_64) - with Updates HVM on the AWS Marketplace (provided by CentOS.org). After logging in (as the centos user) run the following commands as root:

The script does some package updating that cuts the SSH connection to the EC2 instance, and when the connection gets cut, the script dies in the middle with a "Broken pipe" and leaves the OS in an unusable state. By using nohup we avoid the broken pipe issue.

After the conversion script completes, run the following:

Step 4 will no longer be required, and you can proceed to install the Oracle software prerequisites.

If you feel the need to roll your own Oracle Linux install on Amazon EC2 (since Oracle no longer provides an officially-supported AMI, and you may not be too keen on using one of the community AMI's):

(1) launch an EC2 image using the CentOS 6.5 AMI from the Marketplace (which is free..) then log in as root (not ec2-user)
(2) import the Oracle GPG key
(3) use the Oracle specific rules to convert the CentOS 6 to OL from this document. Specifically, run the following commands as root:
(4) Synchronize the yum repository
Once the command completes, the end-user should have a fully-patched Oracle Linux 6.7.

If you intend to install Oracle Database 11gR2, you can apply all the necessary packages and kernel parameters with this command:

and if you will install Oracle Database 12c R1, use the following:
at November 08, 2017 No comments: